Tax-deferred Plans Like IRAs and 401(k)s are a Scam!

Tax-deferred Plans Like IRAs and 401(k)s are a Scam!

Financial firms are experts at producing an image of providing safe, prudent and unbiased advice. Their offices are often plush and thus produce the image of wealth. They advertise extensively to continue to promote their image as helpful and necessary for your future. But have you ever wondered why their advertising often focuses on retirement planning? 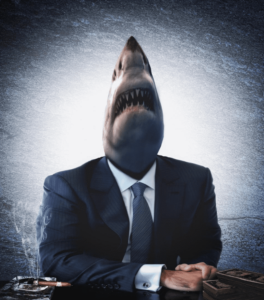 Could it be that financial firms (sharks) make more money on tax-deferred plans? In fact, they make substantially more on these plans. It is no accident that we have been bombarded throughout our lives with their advertising on retirement. We have internalized these ads and made them part of our financial belief system. Without further thought, we focus on retirement planning and use tax-deferred plans such as IRAs, 401(k)s and annuities in the false belief that they are the ultimate tools to help us in retirement. In fact, most people have been deceived into believing that building wealth is the same thing as retirement planning.

Take, for instance, our false financial belief that tax-deferred IRAs, 401(k)s, and other tax-deferred accounts are better because they generate more growth and higher account balances. Wall Street loves to focus on and sell the larger balances that are generated by tax-deferral. It’s easy to sell the sizzle of higher growth, but this growth is only partially owned by the client. A significant chunk of it belongs to future taxing authorities when the money is withdrawn. The lack of ownership is often brushed off by Wall Street as unimportant. What good is the higher growth if it doesn’t belong to you, the account owner?

Wall Street over promotes these plans so they can charge you the management fees for both your share of these accounts and the significant share that belongs to taxing authorities. Yes, these accounts do grow faster without the drag of current taxes, which allows financial firms to charge you on these larger balances that are only partially yours.

To my surprise and shock, through close scrutiny, I discovered every single concept I had been taught about retirement was actually not true in practice. To be blunt, I discovered that tax-deferred saving is a scam. It is promoted in order to generate more profits for financial firms. For tax-deferral to be significantly effective, you must assume lower taxes in retirement than during your working years. In real life, this is not likely to happen.

During your 401(k) accumulation years, your 20s, 30s, and early 40s you are likely earning LESS than later in your life. Thus your tax rates will be lower. Your retirement years will likely come after your highest earning years where you have established higher spending patterns that extend into retirement. Given your extra leisure time, you will likely spend more on travel, dining out, hobbies, shopping, golf, tennis, spoiling your grandkids, and eventually on healthcare expenses.

Many people fund their retirement through tax-deferred plans such as pensions, annuities, IRAs and 401(k)s accounts. Due to higher expenditures in retirement, causing high withdrawals from your tax-deferred accounts, your tax bracket is likely to be higher in retirement. This reality is OPPOSITE from Wall Street’s typical self-serving theory that taxes will be lower in retirement. Contrarily, you should expect to be in a higher tax bracket during retirement. Furthermore, due to mounting federal debt, it is also likely that tax rates themselves will also be higher by the time you retire.

When considering the disadvantages of a 401(k), also consider the obvious advantages when the employee’s 401(k) contributions are matched by the employer. That part is free money, and free money is always worth signing up for. Even if you withdraw matching funds as soon as they vests and become entirely yours. The additional unmatched contributions are harder to justify. 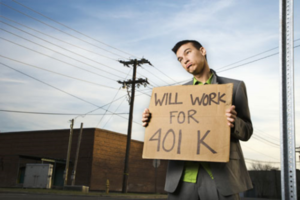 There are many other reasons that 401(k) plans are ill-advised including: limited investment choices, lack of liquidity, penalties if you access the money prematurely, taxes to be paid if inherited by the next generation, higher ordinary taxes to be paid when withdrawn, and tax rates that are likely to be much higher in retirement. But the most important reason is that last one. Your taxes may be higher in retirement, a likelihood that negates any purpose of delaying these taxes until retirement.

Why do employers offer 401(k), 403(b), and 457 tax-deferred plans? The obvious answer is so they don’t need to provide more expensive pension plans. Employers save money by offering such plans.

Years of propaganda aimed at employees has convinced them that a tax-deferred 401(k) is a great company benefit. They are not! (Except for the small portion of the employee’s contribution that the company matches which is a great benefit.) Their focus on employee-contribution supported plans like 401(k)s that reduces the need for employer-paid plans like pension plans. Just like financial firms, employers profit more from featuring tax-deferred 401(k) plans. But again, this is all propaganda as 401(k) plans are a scam!